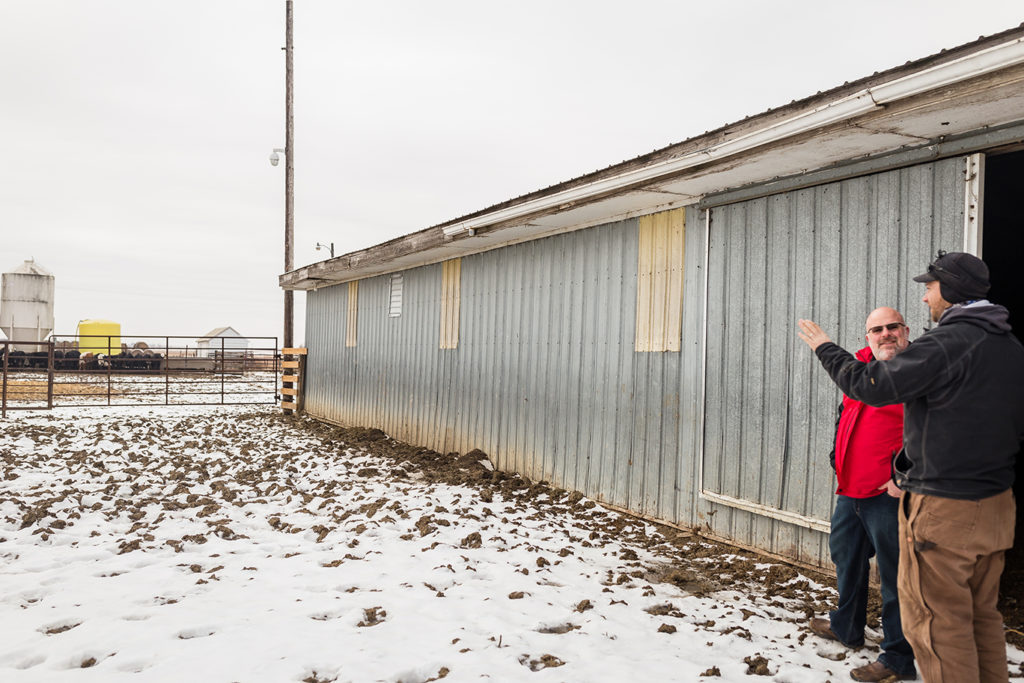 If you were to tell any rancher ten years ago that he would be able to save babies during calving with a camera and a cell
phone, he would probably tell you you’re crazy. If you ask the Browns of Montpelier today, they would tell you that now they have it, they couldn’t go without.

The C-B Charolais farm and ranch operation has had a security camera system for three years now, and it has completely changed the way they operate during calving season. The C-B Charolais’s calve out around 450 calves each year, and third generation Troy Brown claims that even with three of them around there, it was still hard to keep up without a way to monitor the cows, which resulted in lost calves each year.

Troy explained how calving season went before having a  camera system. The process went something like this: someone would physically go check on the cows at least every hour to see if any of them had started calving. Once one had started, they would move them into the barn (if they weren’t there already) and keep checking every hour at least. There’s a chance a calf would be born shortly after the last check, and if anything was wrong the calf probably wouldn’t
make it. In doing the checks hourly in the middle of the night, the cows would stir, causing them to go through more straw. He also noted that when they were stirring up the cows at night, more calves were born then too.

Once they realized that the calving process could be done so much more efficiently if they had a way to monitor the cows without actually going out to the barn, they decided to invest in a professional grade camera system. Dakota Central  technicians installed a point-to-point solution that brings service from the house to the barn with Access Points, eliminating the need to bury fiber to the barn. Four cameras were installed, three inside the barn in different areas, and one outside. Three of the cameras have the ability to rotate or zoom, which they can control from an app.

Now, things run a little different. It really is a complete family operation, down to Troy’s two year old son who already helps watch the cows on the iPad. If the guys are out in the field or busy, Troy’s wife or mom can watch the cameras from the phone or iPad, and let them know if anything is wrong. Troy said even if all of them are gone, they can still be checking the cameras. Before cameras, they weren’t able to go anywhere together during calving; now, they can all run into town for dinner and they don’t miss a thing.

When a cow starts to calf, they make sure they are watching her closely because if there is an issue they usually only have minutes to get to the calf to save it. “The camera system is definitely worth it for us,” Troy said. “It saves us at least five calves a year, if not more.” He explained how he saved one specific bull calf last winter, and when they sold that
one alone it covered the cost of the camera system. Calves aren’t the only thing the cameras have saved. Troy explained
that they weren’t expecting the cameras to save straw as well. Because they are not stirring up the cows in the middle of the night, they tend to rest more at night. This also means less calves are born in the middle of the night because the cows aren’t moving around as much, and waking up less in the middle of the night is always a good thing. “The cameras
save me plenty of sleep,” Troy said as he laughed. “My dad can go right back to sleep after going out, but if I go out at 3:00 in the morning, I’m up for the day,” he said.

The Brown’s are also impressed with the picture quality of the cameras. Because the picture quality is so good, with the outdoor camera they are able to see other things farther away, like coyotes moving through the calving pens at night. Troy explained, “Now that we have the cameras, we find other ways to utilize them other than for calving. We are able to aim the camera at the house when we’re gone in the summer to keep an eye on it.” He said it’s nice to be able to see what the weather is doing when they’re away, and they are able to tell if the power goes out because they will lose connectivity to the cameras.

Of course, as with all technology there are sometimes hiccups. Outdoor cameras may have issues more often due to the elements. For example, Troy explained how there have been times when the snow has been too heavy to see through or the camera has iced up, but he was able to troubleshoot from his phone and rotate the camera so that it thawed itself out.
Overall, the Brown’s are pleased with their camera system, and we are happy to help their operation run more efficiently. Now, if the cameras could feed the cows too, they would be set!